First launched in 1997 the 996 variant of the Porsche 911 was a complete 'clean sheet of paper' redesign of the companies most popular model. It was the first 911 to be water cooled and technically a great step forward from the 993 model it replaced.

The Carrera 4S model or C4S as its commonly know arrived in 2002 and brought together all of the elements Porsche enthusiasts wanted that being the look of the Turbo model thanks to the wide body and Turbo style alloy wheels. 4-Wheel drive and the NA 3.6L Boxer Flat-6 engine. Now the 911 had the looks, the handling and the power.

This particular car is 2004 model which was the final year the 996 C4S was produced before the model evolved in to the 997.

Over the life of the 996 and some other Boxster & Cayman models the cars were blighted by the common failure of the Porsche Intermediate Shaft Bearing or IMS. This car had such a failure which resulted in an extensive engine rebuild by well know Porsche specialist Strasse. The rebuild involves the upgrade to new modified Porsche parts to guard against any such failure again. All of this work is documented and will be supplied with the car.

The specification of this car includes: 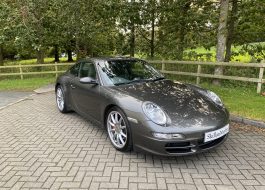